Session 11: The Visual, Truth and History in the Indic Tradition 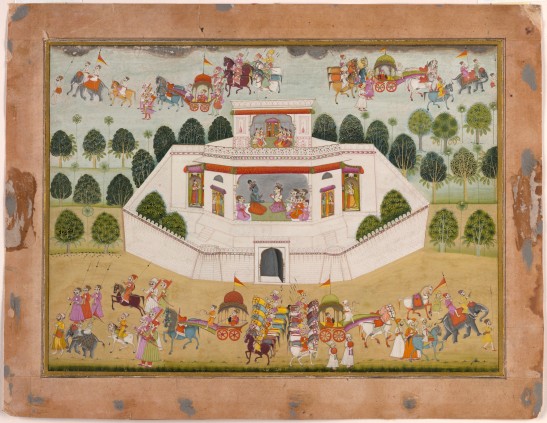 Do we ‘see’ only with our eyes, or are other faculties at work?  Can our visual perceptions ever be unmediated by other things such as language or tradition?  Is visual art always about representation? Or can visual art operate in a different way?

The headings for this and the following session, “The Visual, Truth and History in the Indo-Islamicate Tradition” are admittedly a bit misleading.  As we will see in the readings, the two cannot be completely separated from one another due to the significant and productive exchanges that occurred between them.  For example, Molly Aitken’s The Intelligence of Tradition in Rajput Court Painting reveals just how influential Rajput and Mughal painting styles were upon each other, sharing thematic and stylistic elements, and sometimes even the same human agents (the painters themselves).

The picture is further complicated by the inclusion of readings and case studies from the post-colonial period, as well as pre-colonial traditions.  What relationship do ways of seeing in the post-colonial period have with these earlier modes of seeing and telling through the visual?  Let these be some of your guiding questions, and do not let the somewhat arbitrary division of the material into two sessions prevent you from seeing connections between the various texts, works, and phenomena.

Suggested (but not required) readings:

Selected images from the publications listed above will be used as case studies in class.  In addition, we will also look at the following works if we have time: